With some Ghanian celebrities from the opposition party protesting against the government through online politics, other celebrities share their view and points that one should not discredit the government based on political differences but rather join hands together to build the country.

Ghanaian political commentators, Kelvin Taylor based in the United State of America have issued threats against award-winning artist Stonebwoy and his family.

“You see this Stonebwoy guy, he’s one of the biggest hypocrite the world has seen.

This guy who comes  from the slums of Ashaiman today want people not to associate him to anything going on in Ghana because everything has been politicized.

If Stonebwoy was in any sensible country, he would have lost 50% of his followers and fan base for not speaking up for his fans.

This guy was defended and supported by Ashaiman boys whom many still don’t have decent places to live, no job, no better life for them to also get up there.

When Stonebwoy had money from the support of these same Ashaiman people who are calling for the country to be fixed, he went to buy a house in Trassaco.

As an artiste, Just use your influence and add your voice to a discourse so these people in Ashaiman who supported you can also have something to live on, you are shying away from taking responsibility.

Simply because Gabby’s Radio station gave him money to put him on a show Sound Clash or whatever together with Shatta Wale.

These are the cowards you people call celebrities in Ghana.

Celebrities who cannot speak for their people.

In any case, if the country gets better, would that not make it easy for your fans to get money and buy your tickets when you have a show or stream your music online ?

This Stonebwoy guy and the other one Ayigbe Edem could not share a single tweet in support of Ewes, their own people when Bosom Akufo Addo was using the Military to intimidate and harass them during the voters registration.

When the Npp said they are not Ghanaians and thus Togolese, these guys I mean Stonebwoy and the Edem Guy kept mute and could not defend their own people.

But these same fools were in Ghana tweeting End SARS in Nigeria.

I am never going to mince words again, we will speak in the language they understand.

God will deal with you all 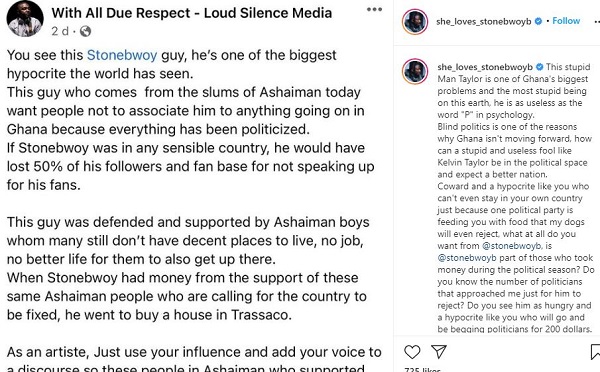 Seems Kelvin Taylor posting his write on social media is not enough but went on to do a video to use Stonebwoy disability to insult him plus raised an alarm that, Stoneboy will be in the USA one day and he will receive a call that his wife and child is shot in the head.

Below is the video: