Nine-year-old Saneie Masilela has become the world’s youngest groom for the second time after remarrying the 62-year-old woman he tied the knot with last year.

Masilela was quoted to have proudly echoed his affection towards his wife despite their age gap.

Meanwhile, VIDEO:Man catches his ‘best friend’ sleeping with his wife

Dressed in a silvery tuxedo, baby-faced Saneie clutched the hand of mother-of-five Helen Shabangu whose children are aged between 28- and 38-years-old – as they repeated their vows a year on in front of 100 guests. 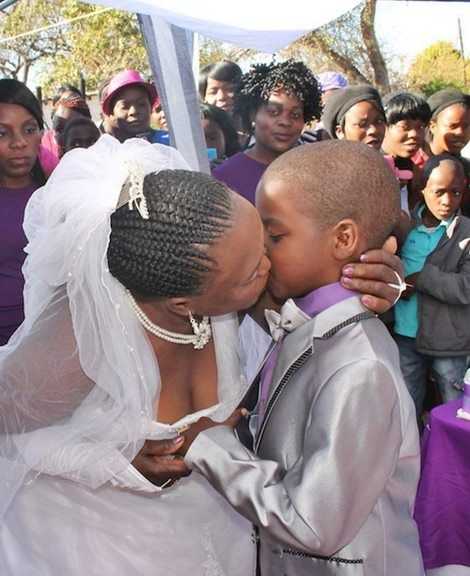 It is said that the boy made it clear that age is just a number when it comes to matters of the heart.Reports also said the young groom made his intention known to his mother who gave a 100% support.

Similarly, a 16-Year-Old SHS graduate Disgraced Sugar Daddy Because He’s Weak In Bed[PHOTOS]  and wants to end their relationship.

The schoolboy says he did it to make the marriage ‘official’ but other villagers in Ximhungwe in Mpumalanga, South Africa describe it as “sickening”.

You can also check out VIDEO: US-based Ghanaian lady sacks her husband for not paying rent

The ceremony took place in front of Helen’s long-term husband Alfred Shabangu, 66, who was there last year as well.

Some alleged the incident happened in 2014 but well it may still look like child-marriage, an illegal act in Nigeria and Ghana, I can’t tell if it so in South Africa.